Commodity packaging and decoration and commercial advertising are all subordinate to the field of commercial marketing, but they have different attributes and management methods, so they are also divided into two different systems.

Below, we briefly analyze their fundamental differences:

From the basic function point of view: packaging refers to the container containing and protection of products, the basic function can be said of the material form, with the development of market economy, as well as the emergence of printing, papermaking and other technologies, people give their decoration and beautification and other conscious The function of the form field forms the concept of "packaging and decorating", but its basic function is "packaging", also called "the last process of product production."

The commercial advertisement is a form of commercial propaganda from the day it appears, and the basic form and role are ideological fields.

From the operation point of view: packaging and decoration in the market circulation process does not go through too many links, the basic process is the manufacturer â†’ commercial areas â†’ consumers, without additional costs, packaging costs included in the product production costs. The release of modern commercial advertising must go through professional advertising business units, and some must be released through certain media units. In the process, manufacturers or merchants must pay additional advertising fees, media fees, and land use fees. The state also has to collect ads to issue special taxes.

In summary, the two are two different systems.

First of all, in terms of purpose: they are all designed to promote the sale of goods and promote the development of the commodity economy.

Secondly, in terms of performance means: All art processing must be performed, and the laws of commercial aesthetics must be followed.

From the very beginning, the commercial advertising industry is committed to promoting the advantages and characteristics of products, companies, services, etc. In particular, modern advertising has a wide range of methods and covers a wide range of areas and has accumulated rich experience in this area.

In addition to beautifying products, packaging and decorating also have some functions of advertisements. However, in a long process of development, emphasis is placed on beautifying commodities, lacking a clear awareness of advertising, and even the limited function of advertising.

In the 1950s, with the rapid development of the commodity economy, the competition in the commercial field became increasingly fierce. Especially in the 1970s and 1980s, with the emergence and spread of new sales methods such as supermarkets, direct sales, and franchise stores, business operators and Packaging workers also realized that it was imperative to refer to the packaging and decorating functions more powerfully in terms of the functions and expressions of advertisements. In the mid-1970s, the famous Japanese packaging worker Ghana was exclaimed: "Packaging is free advertising! "And put forward:" The packaging has a deep advertising principle. "This statement can represent a new understanding of packaging workers. The "Packaging Strategy" theory summarized at this stage also contains a lot of results of packaging research. Some new types of packaging functions that can better fulfill the spirit of packaging, with advertising awareness packaging came into being to meet the needs of fierce market competition. In the advertising trend of packaging and decorating, due to the characteristics of the packaging itself, some of its special advantages are also exerted.

In the following, only the main forms of packaging and decoration on the market are analyzed, and sometimes several forms are also compatible in the same package:

In modern society, the rhythm of people's life is generally accelerated, products are diversified, and the commodity market is exquisite and colorful. Modern advertising emphasizes the presentation of advertising themes in a succinct and concise manner, strengthens brand awareness, strives to increase the attention rate of the audience, and the packaging and decorating reforms also follow suit. It is proposed that packaging design should be able to identify products at five times the distance from the packaging. The concept of the main information, some brand-name goods have improved the image of the license, and some to highlight the brand as the main graphics, in order to facilitate the company's overall product sales.

Pepsi Cola registered fonts are also the main graphics of its packaging and decoration, from its development to the Jane's evolution, but also appreciate the packaging changes. When the packaging was improved around the 1970s, advertising campaigns also cooperated to explain: â€œÂ·â€ (after â€œPEPâ€) is also the stoppage point of syllables, and â€œPEPâ€ is the voice when aluminum cans are pulled apart. â€œSIâ€ is the sound of beverage foaming. This interesting advertising campaign caters to the psychology of American youth. After improving packaging, it has caused product sales, and even surpassed â€œCoca-Colaâ€ where sales have been the first. Cases can also see that the organic combination of packaging and advertising can produce good commercial results.

Second, the rise of the CI campaign launched a package that reflects the spirit of the enterprise

The CI movement that rose in the mid-1950s and the developed countries that swept the economy in the 1970s. The purpose of CI is to integrate the Corporate Concept (MI) and the Corporate Behavioral Specification (BI), and to present it in a "Visual Communication System" (VI) normatively, also called the corporate image design. Packaging and decoration and advertising are all within its scope of improvement, so that the field of packaging and decoration performance to a more in-depth development.

The United States Kodak film is the film industry's old brand name, packaging used in the West is also regarded as noble golden yellow, "Keda" word for the camera shutter sound, with "K" deformation of the main graphics, is the first of Kodak According to its propaganda, the letters are also the king's meaning of "KING", highlighting its authority and the style of the king.

In the 1970s, Japanâ€™s Fuji Group, which implemented CI, was marked by a youthful greenish-green tone. In the white belt with oblique bleeding, the registration word was highlighted in red, and the font was intentionally processed into a fist shape, full of dynamics, and contained. A new-born company has entered the world powerfully. From the improvement of the packaging of these two cases, we can realize that packaging and decoration are not limited to beautifying products and expressing the characteristics of products, but also conveying rich information and expressing the companyâ€™s philosophy. The above two kinds of packaging are also in line with their advertising, business environment and other aspects of design style, enhance their respective market competitiveness.

O Bag kabelka is now being very popular in Italy and Europe countries like o bag Japan  Obag  USA and the o bag cena is around â‚¬100.00 to â‚¬150.00. Since 2012, the most popular bag style is the classic and obag mini style. O Bag Classic body is made of EVA  material, a type of plastic foam, colored, flexible, resistant and light with a particular "soft-touch" which is cold-tolerant, heat-stable, acid and water resistance.

The body presents two holes in each side which makes it easy to customize with interchangeable accessories (handles, shoulder straps, trims, Inner Bags ) Its measurement: 31cm in height, 13cm in width and 42cm in length.

The Bag Handles and inner bags can be custom as PU/canvas/leather/rope materials.

Dongguan Kangta plastic Hardware products Co., Ltd is founded in 2008, specialized in design and manufacture O bag and other EVA Foam custom products. With 10 years of professional R&D capability, we had developed around 50 styles of EVA Obag Bags including EVA Handbags, EVA shoulder bags, EVA backpacks. All those EVA fashion bags are free of molds charge, 52 colors for your choose and your logo is also welcome to laser on the bags. 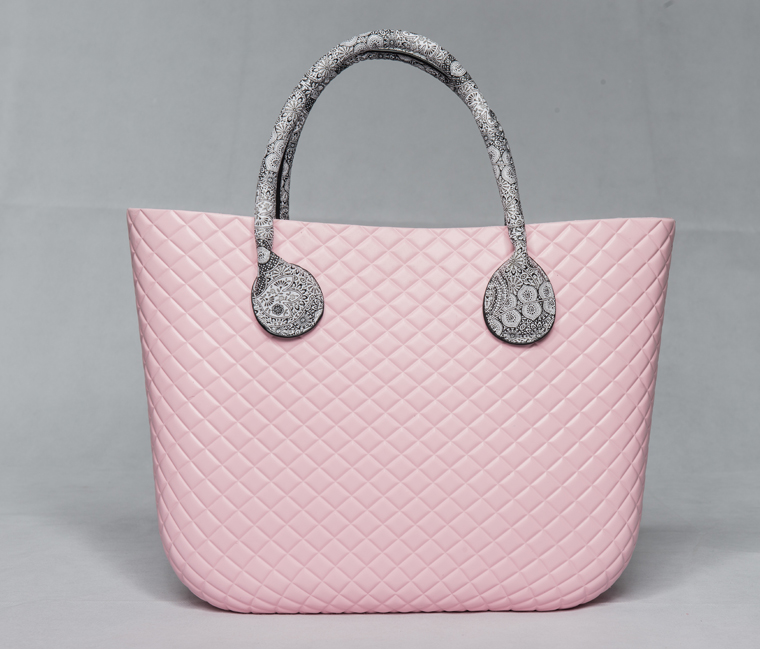 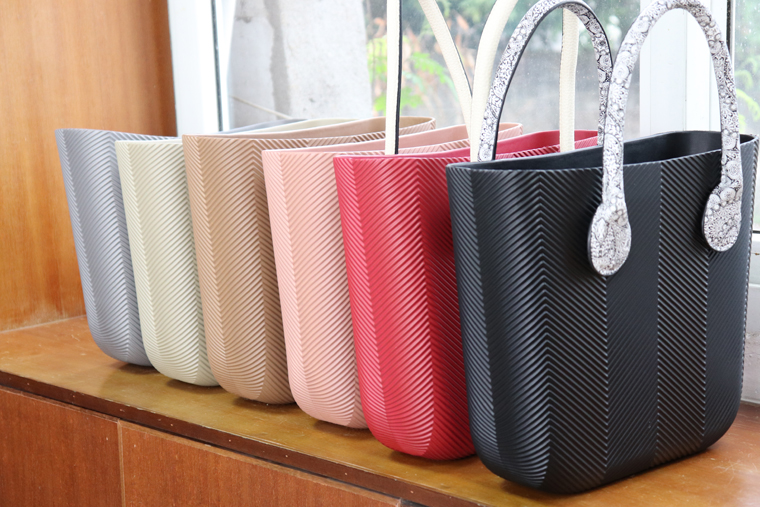